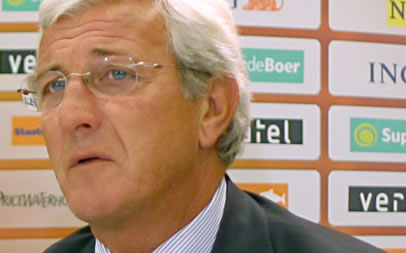 Midfielder Mauro Camoranesi remained in the squad despite injuring his left knee during training Tuesday.

Lippi did not offer any immediate explanation for his choices, although he was due to meet with reporters Wednesday.

"Didn't make it, but I have no regrets," Rossi wrote on Twitter.

"`Worked hard and showed what I could do. I guess the coach had other plans. Good luck Italy."

Rossi was born in New Jersey to Italian parents and has dual citizenship. He played well for Italy at last year's Confederations Cup, scoring twice in the opener against the United States, but struggled during the second half of this season with his Spanish club Villarreal.

"Can't wait to go back home to my family now!!" Rossi wrote.

Fabio Grosso, the left back who converted the decisive penalty kick in the final against France four years ago, had already been cut two weeks ago after being named to the preliminary 30-man squad.

The Azzurri have friendlies set up vs. Mexico in Brussels on Thursday and vs. Switzerland in Geneva on Saturday.

At the World Cup, Italy opens against Paraguay on June 14 and will also face New Zealand and Slovakia in Group F.