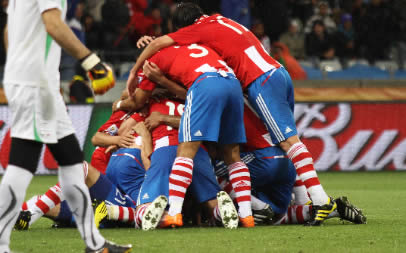 Paraguay reached the world cup quarter finals after beating Japan on penalties in their Round of 16 World Cup match held in Pretoria on Tuesday.

Paraguay won 5-3 on penalties
Paraguay striker Roque Santa Cruz saw his third and final World Cup finals extended by at least one match on Tuesday after the South American side edged Japan 5-3 on penalties to reach the World Cup quarter-finals for the first time after the match ended 0-0.
The Manchester City forward has already said he does not plan to take part in a fourth World Cup in Brazil in 2014, when he will be 32, but now faces the prospect of a quarter-final against either Spain or Portugal on Saturday in Ellis Park, Johannesburg.
But Santa Cruz kept his Cup career alive for at least another match and be part of national World Cup history for a side that has waited a long time to crack the final eight at a World Cup, failing three times before in the Last 16, before at last achieving that.
Paraguay's prior knockout setbacks came at the hands of Europe's elite.
England routed Paraguay 3-0 in 1986 while hosts France eliminated the South Americans in 1998 with the World's Cup's first golden goal by Laurent Blanc. In 2002, Germany sent La Albirroja (the White and Red) off home with a goal two minutes from the final whistle.
The Paraguay victory also means four of eight World Cup semi-finalists are from South America, with the possibility that Argentina, Brazil, Uruguay and Paraguay could create an all South American World Cup final four.
Santa Cruz had his best chance against Japan in the 28th minute when a defelction off a corner kick dropped right at his feet in the penalty area, but the 28-year-old striker hooked the ball wide of the goalpost.
A stalwart defensive play from Santa Cruz came on a Japan corner in the 62nd minute when he leaped high to deflect a header with his own head but was replaced before the final whistle, being removed four minutes into extra time.
Santa Cruz was a regular at the age of 20 for Bayern Munich when he was called into Paraguay's 2002 lineup and scored in a draw with South Africa.
He was part of the Bundesliga club's 2001 Champions League title run, although he was on the bench for the championship victory over Valencia.
Santa Cruz stayed with the Bundesliga club until 2007 when he joined English Premiership side Blackburn, where he remained until last year when he joined Manchester City, where he managed only three goals in 19 starts last season which admittedly saw his form affected by injury.