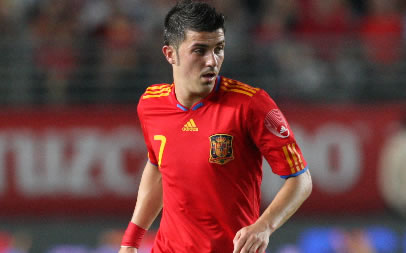 David Villa scored the only goal of the match as Spain beat Paraguay 1-0 at Ellis Park in the 2010 Football world cup quarter final.
Villa's goal came in the 83rd minute and just as the match looked like it was headed for extra time.
Spain will contest their first ever World Cup semi-final against Germany in Durban on Wednesday.
Prior to this victory Spain's best ever result was in Brazil in 1950 when they finished fourth.

Villa became the tournament's leading scorer with his fifth goal to crack the clustering Paraguayan defence seven minutes from time.

Spain will now play Germany in the last four in Durban on Wednesday.

It was the new Barcelona man's 43rd goal in his 63rd international and puts him just one goal behind Raul's 44 goals in 102 games as Spain's all-time leading scorer.

While Liverpool strike partner Fernando Torres again failing to make an impression - he was substituted after 56 minutes following his fifth scoreless appearance after ankle surgery in April - Villa goes from strength to strength.

Villa's late intervention saved Spain from the anxiety of being drawn into extra time and possibly a penalty shootout with the tenacious South Americans after a sensational exhange of missed penalties midway through the second half.

The game burst into life in the 59th minute when Paraguay were awarded a penalty and Barcelona defender Gerard Pique was yellow carded for holding on to Oscar Cardozo's arm.

But Cardozo's shot was pounced on by Iker Casillas and as play swept upfield Spain were awarded penalty of their own after Antoin Alcaraz brought down Villa.

Alonso's second spot-kick was saved by Villar, much to the jubilation of the Paraguayan players.

It was then left to Villa, who joined Barcelona just before the World Cup in a 40 million euros (49.4 million dollars) four-year deal from Valencia, to once again settle the issue.

Midfielder Andres Iniesta played in Barcelona teammate Pedro, whose shot cannoned off the left post and rebounded out to Villa, whose volley also ricocheted off the right post, but this time the ball spun into the net for the winner.

Villa has become one of the stars of this World Cup, scoring twice in Spain's 2-0 win over Honduras, the opening goal in the 2-1 victory over Chile, and the winner against Portugal in the round-of-16 before his latest strike against Paraguay.