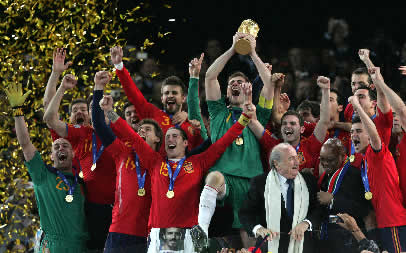 Spain beat Holland in extra time 1-0 to become the 2010 Football World Cup champions in South Africa.
With just four minutes of extra-time remaining, substitute Fernando Torres slid over a cross from the left which was partially cleared as far as Cesc Fabregas and his pass found Iniesta lurking in the area.
The Barcelona star promptly set his sights and fired past Dutch keeper Maarten Stekelenburg.
Five minutes earlier, the Dutch were down to 10 men when referee Howard Webb red-carded John Heitinga for a foul on Iniesta.
A niggly game saw a proliferation of yellow cards and missed chances at both ends - most notably in the first period of extra-time when Spanish substitute Fabregas raced onto a pass from Iniesta only to see Dutch keeper Maarten Stekelenburg block his shot.
Then fellow substitute Jesus Navas looked odds on to score but his shot deflected off Giovanni van Bronckhorst and hit the side-netting.
Andres Iniesta said he had yet to grasp his achievement after scoring in extra time to secure a historic victory for Spain in a 1-0 win over the Netherlands in the World Cup final at Soccer City on Sunday night.
The Barcelona midfielder was named Man of the Match in a very physical match which saw 14 yellow cards produced by referee Howard
Webb. John Heitinga of the Netherlands was sent off for a second yellow in the 109th minute.
"I still can't believe it yet, having been given an opportunity to score this goal which was so important for my team. Its incredible," Iniesta said.
"I simply made a contribution in a game that was very rough, but
I think Spain deserved to win this World Cup. "We are very proud of this achievement and every member of our squad deserves this, from the first player to the last."
Iniesta said that Paul, an octopus in Germany which predicted Spain would lift the trophy, would have earned a number of new fans
in his home country. "What can I say? We won, so the octopus should be more popular in Spain," he said.
Iniesta's post match press conference was disrupted by three team mates who burst in to congratulate him with beers in hand.
The 26-year-old said he and the rest of the winning side would enjoy the celebrations before considering the bright future ahead for Spanish football.
Spain won the 2008 Euro title, lifting their first major trophy in 44 years, and after playing controlled football throughout the tournament, secured the World Cup title for the first time in their
history.
Iniesta, however, refused to predict how they or other teams would fare at the next global showpiece in Brazil in 2014.
"Now is the time to enjoy this World Cup," he said.
"We'll have to see what happens in four years' time, and where we all are then."