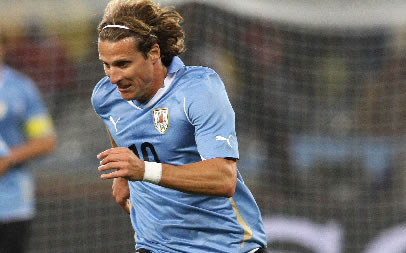 Uruguay striker Diego Forlan was Sunday night picked as the FIFA Golden Ball winner as best player of the 2010 World Cup by journalists accredited to cover the tournament.

The 31-year-old Forlan was chosen ahead of Spain's David Villa, Wesley Sneijder of the Netherlands and current World Footballer of the Year, Lionel Messi.

Nicknamed "Cachavacha" after a comic character, Forlan netted five goals and inspired Uruguay to the semi-finals in South Africa after the team failed to qualify for the last World Cup in Germany four years ago.

He scored seven goals in 13 matches as Uruguay booked their qualification ticket to South Africa to underline his status as a top marksman.

A once aspiring tennis player, Forlan is a skilful centre-forward who has featured for several top teams, including Manchester United, Villarreal and Independiente of Argentina.

Football runs in the Forlan family as his father also represented the South American country at two World Cups, in 1966 and 1974, while his grandfather, Juan Carlos Corazzo, was Chile coach in 1962.

A graduate of the Penarol youth teams, Forlan moved to Manchester United in early 2002 after an impressive performance across the border at Independiente, but he struggled to live up to expectations in England.

A switch to Villarreal of Spain in August 2004 helped him rediscover his goalscoring touch as he netted 25 goals in his first season to finish as La Liga's top scorer and also clinched the European Golden Shoe.

The former youth international has since extended his fine form in front of goal for both Atletico Madrid and the national team to make him one of the most feared strikers in the world game.