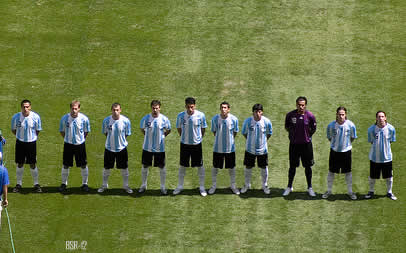 Martin Demichelis struck a late goal to set up Argentina for a 2-0 World Cup win over Greece Tuesday, top spot in Group B and a second-round showdown with Mexico.
The Bayern Munich defender ended the brave resistance of the Greeks with goalkeeper Alexandros Tzorvas to the fore by slamming the ball into the net from point-blank range on 77 minutes after a corner was not cleared.
And veteran substitute Martin Palermo added a second 60 seconds from full-time when he pounced on a rebound and hammered the ball into the corner of the net.
World Footballer of the Year Lionel Messi captained the two-time champions in the absence of midfielder Javier Mascherano as coach Diego Maradona made seven changes from the side that triumphed 4-1 against South Korea.
The South Americans gave a first start at the tournament to striker Diego Milito, whose two goals against Bayern Munich last month brought Inter Milan their first Champions League title in 45 years.
Argentina thrashed Greece 4-0 in the World Cup 16 years ago with Maradona among the scorers, but he later failed a drugs test and never played in the competition again.
A Greek team coached by wily German Otto Rehhagel set out a defensive stall and after a cagey opening period they came under pressure with Tzorvas called into action twice.
Sergio Aguera burst through only to be denied by a save at the expense of a corner and when that was partially cleared, Juan Sebastian Veron unleashed a powerful drive that was tipped over.
These close shaves were the signal for sustained pressure from the South Americans, whose goalkeeper Sergio Romero was a virtual spectator at chilly Peter Mokaba Stadium.
Greece finally showed some attacking intent when a superb lobbed pass from captain Giorgos Karagounis was just too long for Glasgow Celtic striker Giorgos Samaras to reach.
Tzorvas was fast becoming the busieset footballer on the field as he foiled Maxi Rodriguez and made another superb save on the stroke of half-time to deny a curling Messi shot and leave the match goalless at the break.
The second half followed a similar pattern with Argentina continually pressing only to be denied by a series of Tzorvas saves until Demichelis abandoned his defensive duties and turned scorer.
Argentina will now play Mexico - whom they beat in the last 16 four years ago - for a place in the quarter-finals.