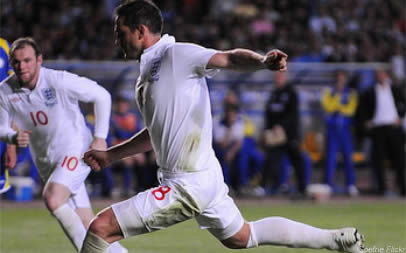 Fabio Capello and Frank Lampard demanded Sunday FIFA introduce goal-line technology after the England midfielder had a perfectly good goal ruled out in his team's 4-1 World Cup mauling by Germany.

Germany were leading 2-1 in their last 16 clash just before half-time when a Lampard shot bounced off the underside of the German crossbar and landed a yard over the goal-line but it was missed by both Uruguayan referee Jorge Larrionda and his assistant.

The clamour for technology and video replays became even more vocal later Sunday when Argentina's opening goal in their last 16 clash with Mexico at Johannesburg's Soccer City was allowed to stand despite Carlos Tevez being in an offside position.

"I am in favour of goal-line technology, especially after tonight," said Chelsea midfielder Lampard.

"The ball crossed the line, it was over, it was so obvious. If we had got back to 2-2 at that moment, it could have been different. It's a huge disappointment."

"We had a meeting pre-World Cup with someone telling us a million different rules, changes that hardly affect the game and the big one that affects this game today hasn't been brought in so it's a no-brainer."

Capello said he was amazed that football is still to fall into line with many other sports which have embraced technology.

"It's incredible that in a time of technology, the referees aren't capable of deciding if there has been a goal or not," said the Italian.

"The match could have been different after this goal."

"When you go 2-0 down and then you get a goal back it gives you a lot of confidence and belief and then to see that ball bounce behind the line and see the linesman 20 metres behind play is very disappointing," he said.

"FIFA will have to look at that because I looked across at the linesman and he was by the edge of the area so how can he see if that's over the line or not."

But Gerrard said he was not making excuses.

"For me to just stand here and say that one moment is the reason why we got beat today would be a lie.

"It's one of them things. I'm no expert. I don't know whether goal-line technology will change things but technology would have made it two-all today and given us big belief and confidence that we could beat the Germans."

But goalkeeper David James said Lampard's strike was such a blatant goal that goal-line technology was not required.

"You don't need technology when the ball's a yard over," he said, adding he could tell Lampard had scored from everybody's reaction.

"Unfortunately, the incident has definitely changed the outcome of the game because (it would have been) 2-2 and we were pressing after that as well.

"Technology, it would be nice but in these circumstances I don't think it was something that was needed," he added.

The International Football Association Board (IFAB) ruled out the use of goal-line technology and video replays at its meeting in March as anger still simmered over Thierry Henry's infamous handball against Ireland which helped France into the finals.

"The door is closed. The decision was not to use technology at all," said FIFA general secretary Jerome Valcke at the time.

The decision was reached after officials watched presentations of two systems, Cairos - a chip inserted in a ball, and Hawk-Eye - used in tennis and cricket.

At Soccer City, Carlos Tevez's opening goal against Mexico was scored from an offside position.

Italian referee Roberto Rosetti allowed the 26th-minute goal to stand despite the furore caused by a replay of the incident on the stadium's giant TV screens.