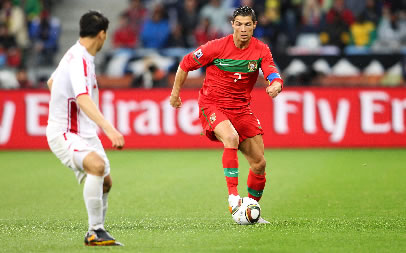 This emphatic win is surely enough for the Portuguese to make it into the knockout stages but they will only know their fate after the meeting against Group G log-leaders Brazil in Durban on Friday.

Brazil, with six points after two Group G victories, are already assured of a place in the next round but Portugal and the Ivory Coast are the contenders for the second team to advance from this group.

Ivory Coast will be playing Korea DPR on Friday at the same time in Nelspruit but would need to win by a massive margin to threaten Portugal's passage.

The crowd of 60, 000 warmed to Portugal as they made all the early running and their initial efforts produced two gilt-edged scoring opportunities in the opening six minutes, with both strangely falling to defender Ricardo Carvalho.

He skied a fourth-minute effort when a chance beckoned plumb in front of the Korea goal and, two minutes later, his header was kept out by the framework of the posts.

The wet soggy pitch, as a result of heavy rains earlier in the day, became far more of a challenge 10 minutes after the kick-off when a heavy downpour made conditions even more of a nightmare as players and ball alike skidded on the slippery surface.

But the prevailing elements did prove to be a great leveller as it helped to restrain Portugal's grip on the match while the Koreans were trying to contain the pressure in defence.

The Koreans, however, gave their supporters plenty to cheer about as they staged penetrative break-outs every now and again which the Portuguese defence only just managed to contain.

In the first 20 minutes, the Koreans rifled some four shots from deep options but these were usually wide of the mark.

Although there was no let-up from the in the first half, Portugal seemed to be coping far better with the conditions as they took play to the Korea penalty area with contemptuous ease.

It came though as no surprise when they did manage to grab the opening goal in the 28th minute when midfielder Raul Meireles scored, with Tiago supplying the defence-splitting pass.

The unmarked Porto midfielder streaked through a yawning gap in the Korean rearguard before slipping the ball past Korea goalkeeper Ri Myong-Guk.

Six minutes later, Meireles spurned a chance to double his side's lead when his tame effort, coming at a time when he shrugged off his marker, trickled fractionally wide of the post, with Myong-Guk stranded between the sticks.

Tiago was again prominent on the approach work.

The crowd favourite and Portugal skipper Cristiano Ronaldo put in a workmanlike performance and, although he was never favourably positioned to have a crack at the target, he landed a long range effort just ahead of the break, without success.

On the evidence of their first-half superior display Carlos Queiroz's Seleccao deserved their slender one-goal lead at the break against the Chollima, who were still looking for their first log point after two outings.

When the game resumed, there were ominous signs Portugal would tighten their grip on the match as they seemed more patient in their approach work.

The Koreans were hard-pressed to contain the early second -half sorties which were channelled mostly down Portugal's left flank.

But there was no warning of what was to follow in an eight-minute passage of play when the rain stopped and the match poured goals instead - three in all to Portugal to secure a 4-0 lead.

The goals were scored by Simao (52rd minute), Hugo Almeida (56) and Tiago (60) and the goal glut effectively ended the match as a contest.

The North Koreans, to their credit did not throw in the towel and kept soldiering on bravely. They occasionally managed to take play into Portugal's penalty area without threatening.

Nine minutes from the end, however, the Koreans suffered more humiliation when Portuguese substitute Liedson banged a first-time volley into the roof of the Korean goals for a 5-0 lead.

To make matters worse, Ronaldo and Tiago each scored in the space of three minutes at the death to crown Korea DPR's 7-0 whitewash.