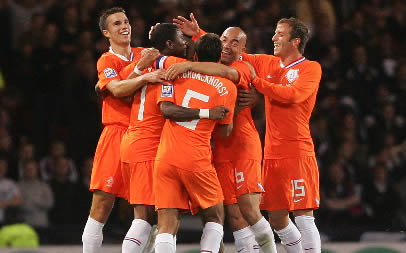 Arjen Robben and Wesley Sneijder scored in either half on Monday to send Holland through to the World Cup quarter-finals after beating Slovakia 2-1, surviving Robert Vittek's late spotkick.

The Netherlands eased into the quarterfinals with Arjen Robben and Wesley Sneijder scoring in each half. Slovakia was awarded a penalty just before the final whistle and Robert Vittek scored with the last kick of the match.

The other remaining round of 16 matches - Paraguay-Japan and Spain-Portugal - take place Tuesday. Uruguay and Ghana have already qualified for the quarterfinals.

Argentina and Germany also got through Sunday, but only after refereeing mistakes that FIFA is refusing to comment on.

FIFA spokesman Nicolas Maingot faced hostile questioning from reporters, but said it was "obviously not the place" to debate refereeing errors or the merits of video technology.

TV replays showed that England was denied a goal against Germany on Sunday when Frank Lampard's shot bounced down from the crossbar and over the goal line.

Uruguayan referee Jorge Larrionda waved away the 38th-minute non-goal, which would have leveled the game at 2-2. Germany went on to win 4-1.

Later Sunday, Argentina's first goal in a 3-1 win against Mexico was scored by Carlos Tevez from an offside position, but was allowed by Italian referee Roberto Rosetti after he consulted his assistant.

Mexico players protested to the match officials after seeing replays on a stadium giant screen, which showed the infringement.

FIFA president Sepp Blatter hasn't commented publicly - not even on his much publicized Twitter feed - since attending both controversial games, where he witnessed the refereeing errors. But he has strongly opposed introducing any video technology to help referees.

At least one Germany player called for new goalline technology.

"If there is a possibility to use good technology, such as goal cameras or balls with chips, then maybe it should be used," striker Miroslav Klose said.

"I am not sure about video replays but if you have a chip in the ball that sends a signal to the referee's ear or beeps, then why not. If you can have it in other sports, why not in football."

German media hailed its young team and reveled in belated revenge for a disputed goal 44 years ago that put England on course for its only title.

"Boys, we love you!" read the front-page headline in Monday's edition of the mass-circulation daily Bild after Germany's victory.

"England Muellered away," it screamed over a photo of Bayern Munich forward Thomas Mueller celebrating one of his two goals.

British newspapers, meanwhile, attacked England's squad and called on coach Fabio Capello to resign after the chastening defeat. The papers chose not to focus on the refereeing mistake, instead directing their outrage at the players and the Italian coach.

The Sun summed up the mood, devoting its front page to a banner headline: "You let your country down."

The back page of the mass-circulation tabloid read "Time's up Fab," and printed a photo of the players alongside the statement, "Go - and take these losers with you!"

Five workers at the luxury hotel where England stayed during the World Cup were convicted of stealing cash, football shirts, a medal and underwear, police said.

The five workers from the hotel near Rustenburg, northwest of Johannesburg, were sentenced to three years in prison.