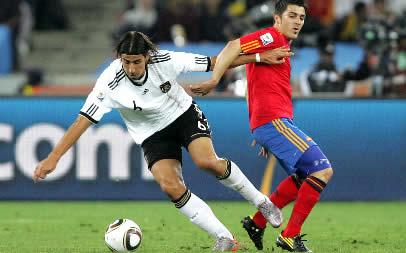 Nearly a month, 62 matches and tens of thousands of vuvuzela bleats later, the World Cup is down to two title contenders: Spain and the Netherlands will meet in Sunday's final at Soccer City.

Spain's veteran central defender Carles Puyol soared high in the 73rd minute from a corner to head into the German net after a tight, technical and gripping game.

Puyol's goal was the only one of the match against a Germany team that could not sweep aside its opponents as it had done with previous opponents.

The Netherlands booked its final spot a day earlier with a 3-2 win over Uruguay at Cape Town.

With 28 of the original 32 teams now out of South Africa - Uruguay and Germany will play in Saturday's third-place match at Port Elizabeth - the 19th edition of the World Cup is down to two glamorous European sides each trying to win the title for the first time.

Spain has struggled throughout the World Cup but found its confidence in Durban, playing an intricate, short passing game that eventually ground down the Germany midfield.

"From defense through to attack I think we played a great game," Spain coach Vicente del Bosque said.

"We've got another game in front of us, let's see if we are able to control the ball. We're in good shape physically, so let's see if we can win." Germany coach Joachim Loew paid credit to Spain.

"In the last two or three years they have been one of the best and most united teams," Loew said. "They move the ball well and we couldn't play the way we like to play."

Five planeloads of football fans headed for the match experienced long delays landing at Durban's King Shaka international airport, forcing some of the fans to miss the game or be late.

Four planes from Johannesburg and one from Cape Town were initially refused permission to land after the airport was swamped by arrivals, airport spokesman Bongani Maseko told The Associated Press.

All the passenger were eventually allowed to land and given a police escort to the stadium, though too late for many fans to see any of the match.

FIFA said Wednesday it had not decided who will present the World Cup trophy to the winning captain.

Former South Africa president Nelson Mandela is expected to do the honors if the 91-year-old anti-apartheid legend is well enough to attend the match.

Zimbabwean President Robert Mugabe is expected to attend Sunday's final, one of 14 heads of state planning to be there.

The 86-year-old Mugabe, who has been in power since 1980, has been accused of human rights abuses and of running a campaign of political violence in the country. His presence has already garnered complaints from rights groups.

An official with South Africa's foreign ministry said leaders from Kenya, Swaziland and Burundi will be in the stands, as well as Lesotho's King Letsie and King Mswati of Swaziland.

The Colombian pop star will start strutting her stuff about two hours before the final, which is scheduled for 8:30 p.m. in Johannesburg (1830 GMT).

By the time the world champion is decided, a British tabloid journalist arrested and charged after a fan appeared in the England team's dressing room after a World Cup game could know his fate.

Simon Wright of the Sunday Mirror appeared in court Wednesday and will face charges of attempting to defeat the ends of justice and breaching a contravention of the Immigration Act in a two-day hearing Saturday and Sunday.

A British bookmaker said it was offering even odds that Paul the Octopus, who has guessed all of Germany's results correctly so far, including Wednesday's defeat, will pick the winner of the final.