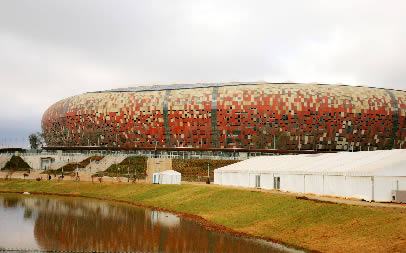 Most of Africa are still trying to get over Ghana's loss against Uruguay on Friday, after the last African country in the tournament missed a penalty in the final seconds of extra time before losing a shootout.

Ghana was on the verge of becoming the first African nation to reach the World Cup semifinals, but Asamoah Gyan sent his spot kick onto the crossbar after Uruguay striker Luis Suarez had swatted away Dominic Adiyiah's goalbound header with both hands.

After the 1-1 draw, the South Americans won 4-2 on penalties.

In a statement, South Africa's governing African National Congress said it was impressed by Ghana's performance, saying it proved Africans were capable of playing at the highest level.

"We are also very confident that the lessons learnt from this tournament will put Africa in a better position for the next World Cup in Brazil," said the ANC, which had urged South Africans to support Ghana after South Africa became the first host nation eliminated in group play.

Netherlands striker Robin van Persie is a doubt for his team's World Cup semifinal meeting with Uruguay after he went to a hospital Saturday for a scan on the arm he injured in the quarterfinal win over Brazil.

Netherlands coach Bert van Marwijk said he did not yet know the extent of the injury but did not think it was serious.

Away from the pitch, American socialite Paris Hilton had to appear in court in Port Elizabeth late Friday after being arrested on suspicion of possession of marijuana following the Brazil-Netherlands game.

The court dropped the charges against Hilton after her co-accused, Jennifer Rovero, "acknowledged to be in possession of cannabis, and pleaded guilty," said Brig. Sally De Beer, a spokeswoman for South African police.

A publicist for Hilton said the incident was a "misunderstanding."