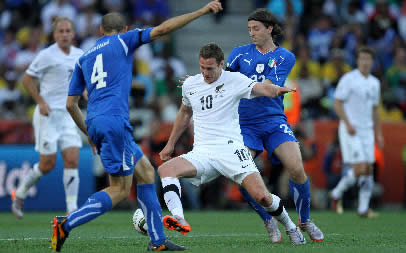 Defending champion Italy was held to another 1-1 draw Sunday, this time by New Zealand, in the latest World Cup surprise.

The 78th-ranked All Whites took the lead in the seventh minute when 36-year-old Italy captain Fabio Cannavaro made a horrendous error, gifting a goal to Shane Smeltz.

Riccardo Montolivo hit the post for Italy in the 27th, and Vincenzo Iaquinta equalized two minutes later with a penalty, after Tommy Smith was shown a yellow card for tugging down Daniele De Rossi inside the area.

Paraguay leads Group F with four points, followed by Italy and New Zealand with two points each. Slovakia is last with one point.