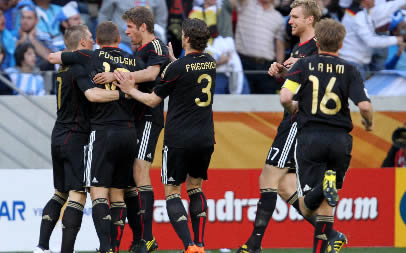 Germany smashed Argentina 4-0 in Cape Town in the 2010 Football world cup final sealing a place in the world cup semi-final.
One Goal from Thomas Mueller, two from Miroslav Klose who was winning his 100th cap and a fourth goal from Arne Friedrich saw off Diego Maradona's men.
Three-time Champions Germany now face either Spain or Paraguay in the semi-final. Uruguay will play Holland in the other semi.

Germany repeated history by beating Argentina in the World Cup quarterfinals for the second tournament in a row, and this time it never looked likely to need penalties to reach the semis.

Thomas Mueller gave Germany an early lead and Miroslav Klose scored two second-half goals either side of Arne Friedrich's simple tap-in as the Germans scored four goals for the third time this tournament.

Klose's two goals gives him 14 total World Cup scores, putting him level with fellow German Gerd Mueller on the all-time list. Brazil's Ronaldo tops the list with 15, but Klose will have two more games at this tournament to surpass him.

Argentina entered the game with perhaps the tournament's most potent attacking lineup, but neither Lionel Messi, Carlos Tevez or Gonzalo Higuain managed to break down the compact wall of German defenders.

Instead it was Argentina's defense that repeatedly cracked as all three of Germany's second-half goals came on well-constructed counter attacks.

After Mueller's third-minute header, Klose added a simple tap-in in the 68th minute. Friedrich then raced from defense to strike home the third in the 74th, and Klose added his second in the 89th.

The lopsided result was a marked contrast from 2006, when Germany won a penalty shootout following a tense 1-1 draw.

That game ended in a brawl after the shootout, but this time Maradona and the Argentina players simply walked off the field with their shoulders slumped.

"To lose like that is very painful," Argentina striker Carlos Tevez said.

"We played badly and sometimes when you make mistakes you go home.

"They did what we knew they were capable of doing."

Later Saturday, Spain was set to play Paraguay in the other quarterfinal at Ellis Park in Johannesburg, with both teams trying reach the semifinals for the first time.