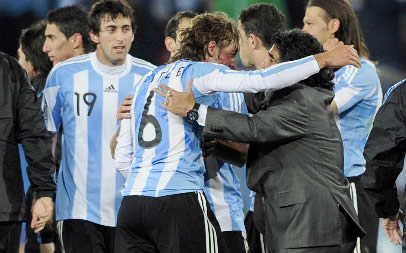 Argentina cruised past Mexico slipping in three goals against their fellow South Americans 3-1 although the match was not without controversy.
Carlos Tevez scored two goals the first of which was from an offside position which the assistant referee missed.

Mexico started well in a match wrought with altercations and disruptions but, after Argentina were awarded the controversial goal to take the initial lead, the Mexicans retreated into defensive mode and the South Americans dominated the rest of the game.

The match was delayed for a few minutes shortly after kick-off with Mexico goalkeeper Oscar Perez forced to remove a roll of tissue paper thrown on to the field by a spectator.

The disruption did little, however, in affecting the players and the match flowed smoothly in both directions.

Mexico had two early chances but Carlos Salcido hit the crossbar in the eighth minute and, seconds later, Andres Guardado's effort missed inches to the left with the keeper well beaten.

Argentina got their first real opportunity in the 12th minute when Lionel Messi produced a tame effort from 20 metres out that was easily saved by Perez.

In the 26th minute, Argentina striker Carlos Tevez collided with Perez and the ball bounced back to Messi who chipped it forward, with Tevez clearly offside when he received the assist.

Tevez found the back of the net with a header and, after a brief discussion with the linesman, referee Roberto Rosetti allowed the goal.

Seven minutes later, Gonzalo Higuain capitalised on some sloppy defence from Mexico's Ricardo Osorio, pouncing on a loose ball and dribbling past Perez before slotting it in to score his fourth goal of the tournament.

The Argentineans wasted a few more opportunities in the first half, but were nonetheless the better side and had Mexico on the back foot with a 2-0 lead at the break.

And while Mexico seemed to have recovered their attacking mindset in the second period, their woes continued when Tevez scored from the edge of the box with a superb strike in the 52nd minute to secure his brace and stretch Argentina's lead even further.

In desperate need of a goal, Mexico showed some urgency and came close to narrowing the gap in the 63rd minute. A Pablo Barrera corner found Javier Hernandez in the box, but the striker sent his header over the bar.

Mexico were eventually rewarded in the 71st minute when Hernandez beat two defenders and found the top left corner with a magnificent close-range strike which stunned Argentina keeper Sergio Romero.

It was no more than a consolation goal, however, as Mexico were eliminated in the second round for the fifth World Cup tournament in a row.

Messi almost gave Argentina a fourth goal in injury time, which would have been the Barcelona star's first of the tournament but, after beating three defenders, his shot was tipped over the bar by Perez.

Argentina face Germany in the quarterfinals in Cape Town on Saturday.