FIFA do an about turn on video technology 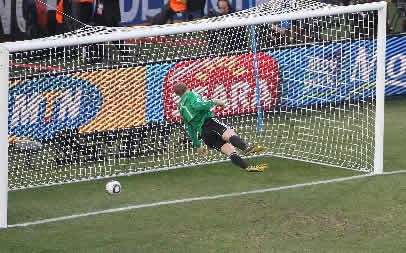 FIFA will look again at introducing video technology to assist referees after president Sepp Blatter apologized to England and Mexico for the officiating errors that helped eliminate them from the World Cup.

Blatter said Tuesday that FIFA will reopen the debate on high-tech methods to improve decision-making on the pitch following the mistakes in Sunday's matches in Bloemfontein and Johannesburg.

"Naturally, we deplore when you see the evidence of referees' mistakes," said Blatter, adding it would be "a nonsense" for FIFA not to look again at goal-line technology with its rule-making panel.

"After having witnessed such a situation," Blatter said, referring to England's non-goal against Germany, "we have to open again this file, definitely.

"Naturally, we will take on board again the discussion about technology. Something has to be changed." The refereeing system won't be changed midway through the World Cup. Blatter said the panel, known as the International Football Association Board, would begin considering changes at a July meeting in Cardiff, Wales.

FIFA can still block any eventual proposal because it retains an effective voting veto at the rules-making body.

Blatter said his apologies were accepted by England and Mexico team officials at the matches.

"The English said 'thank you.' The Mexicans, they just go with the head," Blatter said, indicating that they nodded.

"I understand that they are not happy. It was not a five-star game for refereeing."

England was denied a clear goal when Frank Lampard's shot bounced down from the crossbar over the goal line. That would have leveled the match against Germany at 2-2. Germany advanced 4-1.

The errors created a worldwide furor and put pressure on FIFA, which has long opposed allowing officials to use technology to assist in decision-making.

A Danish member of the FIFA's Referees Committee said Italian referee Roberto Rosetti, who officiated the 2008 European Championship final, was to blame for awarding the goal to Tevez.

"(Rosetti) was not sharp enough, not focused enough and that is an error that the technology cannot change anything about," Peter Mikkelsen Scheef told Denmark's TV2 channel.

Blatter agreed with Scheef, saying incidents "like in the Mexico game, we don't need technology."

FIFA has worked with two projects over the past five years which have tried to definitively determine whether the ball has crossed the goal line.

The Hawk-Eye system, also used in tennis to judge line calls, works by having at least 12 cameras strategically placed around a stadium to calculate the ball's position and send a signal to the referee if a goal should be awarded.

FIFA ball supplier Adidas teamed up with technology firm Cairos to implant a microchip that would alert the referee.

Blatter, who has resisted taking the human element away from referees' decisions, said neither had been 100 percent accurate.

Hawk-Eye "can only reveal what the camera can see" and players on the goal line could block the view, he said, while the microchip option was "technically complicated."

The IFAB - which comprises officials from FIFA and the four British national associations - suspended both experiments in March 2008.

FIFA has the greatest influence on the 125-year-old panel because it has four votes, while the associations of England, Northern Ireland, Scotland and Wales have one each. Six votes are needed for a motion to pass.

Also Tuesday, Blatter announced that FIFA will update its referee training program. It has set a deadline of October or November to create a new concept for improving communication and decision-making between the match officials at top tournaments.

Blatter said the dossier is "on the presidential table."

He said FIFA spent $40 million (&euro;33 million) on a program to prepare match officials worldwide before selecting 30 referees and 60 assistants to work in South Africa.

"They have their eyes, their perception of the game. So let's make that better and hope we are going forward," Blatter said.

Speaking to reporters at a briefing, Blatter said the controversy had not spoiled his enjoyment of the tournament.

"Generally, I am happy with what I have seen," said Blatter, who has attended 20 of the first 54 matches since the World Cup opened June 11.

He singled out Ghana's 2-1 extra-time victory over the United States in the second round on Saturday as his most memorable match so far.