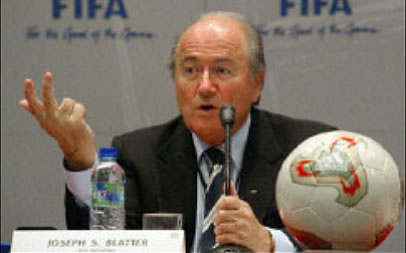 England and Mexico received a fulsome apology from FIFA President Sepp Blatter on Tuesday over refereeing errors during their World Cup last 16 matches and announced FIFA would discuss the introduction of goal-line technology at a meeting next month in Cardiff.

The Swiss was reacting to two incidents on Sunday when England's Frank Lampard had a goal disallowed even though it was clearly over the line in the clash with Germany which would have made it 2-2.

Mexico were also left aggrieved when Argentinian striker Carlos Tevez was clearly offside when he scored their first goal and it was made worse when the incident was shown on the big screen.

Referee Roberto Rosetti was unable to disallow the goal as he is forbidden to take into account such evidence. Argentina went on to win 3-1.

"Personally I deplore it when you see evident referee mistakes but it's not the end of a competition or the end of football, this can happen," said Blatter.

"The only thing I can do is yesterday I have spoken to the two federations (England and Mexico) directly concerned by referees mistakes.

"I have expressed to them apologies and I understand they are not happy and that people are criticising.

"I apologised to England and Mexico. The English said 'thank you' and accepted that you can win (some) and you lose (some), and the Mexicans bowed their head and accepted it.

Blatter said that the only technology that would be discussed would be goalline technology which would have made no difference to the Mexican game or indeed to the incident when Thierry Henry's handball set up what proved to be the crucial goal in the France v Ireland World Cup play-off last November.

"The only principle we are going to bring back for discussion is goal-line technology," said Blatter.

"Football is a game that never stops and the moment there was a discussion if the ball was in or out, or there was a goal-scoring opportunity, do we give a possibility to a team to call for replays once or twice like in tennis?

"For situations like the Mexico game you don't need technology.

"Its obvious that that after what we have experienced so far it would be a nonsense not to reopen the technology topic in July (21-22) in Cardiff."