Domenech's reign with France ends in all time low 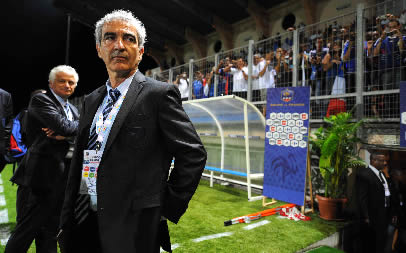 France's footballing fortunes were on top of the world 10 years ago, having added the European title to their world crown of 1998.

On Tuesday in Bloemfontein it reached its chaotic and demoralising nadir.

A humiliating 2-1 defeat to South Africa, with a red card for young midfielder Yoann Gourcuff to rub salt into the wounds, sent Raymond Domenech and his men scurrying for home with just one point and one goal from three games.

How that dramatic collapse happened - from the soaring heights of 2000 to the dismal depths of 2010 - will be subject of much soul-searching in French sporting circles over the next few weeks and months.

Laurent Blanc - a star of that 2000 side - must be wondering what he did wrong to inherit this poisoned chalice when he replaces Domenech in the hotseat.

Truth be told, the signs had been there since the defence of their world title ended after the group stage in 2002 under the increasingly confused gaze of Roger Lemerre - who had replaced World Cup winner Aime Jacquet at the helm and guided them to the Euro 2000 title.

Even with a large part of the Euro squad still there and talented younger players making their presence felt, Lemerre, formed and honed like Jacquet in the narrow cloistered confines of the National Technical Centre, was unable to revert to a plan B when things went wrong with the previously winning formula.

However, Lemerre steadfastly refused to accept responsibility for the traumatic exit - they went out without even scoring a goal - and had to be sacked, though, then French Football Federation (FFF) president Claude Simonet said it was more down to Lemerre being battle weary.

"Resigning amounts to recognising that a mistake was made," he said at the time.

"In my opinion there was no mistake. A change like this ...can be linked to weariness, to a desire for change." Therein lay the crux of the problem - that there was no overall crisis in terms of strategy, but a change of coach would sort things out.

Enter Jacques Santini - a member of the celebrated St Etienne side that dominated the domestic scene and reached a European Cup final - who had proved his credentials by coaching Lyon to their first ever league title.

However, Santini undid all the good garnered out of the best record in qualifying for Euro 2004 by announcing before the finals in Portugal that he would not be staying on and instead had accepted to coach English Premier League side Tottenham Hotspur.

Even with the wisened heads of seven of the World Cup winning squad in their ranks they never looked like defending their title eventually bowing out to ultimate champions Greece in the quarter-finals.

Now trophyless, the FFF turned to Domenech - another institutionalised insider, who who had been in charge of the Under-21 side - to re-establish their supremacy or at least rebuild their reputation.

To say that Domenech's six-year reign will never be forgotten is an understatement.

Getting them to the 2006 World Cup final and only losing on penalties to Italy was one thing, but already in Germany the coach's divisive style had provoked dissension in his squad and anger among the French public.

The Euro 2008 finals exposed Domenech's limitations even further as they went out in the first round, but the FFF refused to hound him out of his post.

Ultimately they have joined him in the dock as much as Nicolas Anelka and the rest of the squad for the debacle that has been their 2010 World Cup finals campaign.

Ironically the FFF and their president Jean-Pierre Escalettes entered the tournament on a relative high having engineered France's victory in winning the right to host the Euro 2016 finals.