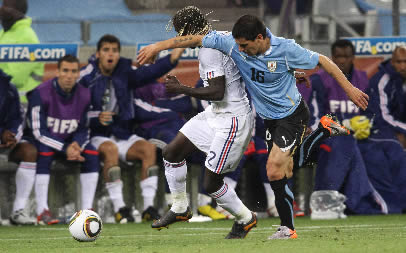 Defence triumphed over attack in the 2010 World Cup Group A match at the Cape Town Stadium where France and Uruguay, who finished the game with 10 players, played to a goalless draw on Friday evening.

Both teams had gilt-edged chances to break the deadlock but their finishing, rather than stout defence overall, was found wanting.

France took the initiative at the start by opting to channel their possession down the right flank where their skipper Patrice Evra was orchestrating the sorties into the Uruguay half.

Uruguay seemed content to absorb the early pressure and they hardly raised a sweat breaking down the French moves near the penalty area.

However, they enjoyed a let-off in the seventh minute when French striker Franck Ribery reeled in a goalmouth cross which his teammate Sidney Govou, unmarked in front of the Uruguay goals, failed to steer into the nets.

Uruguay also chose the right flank to work their way into the opposition half and the ploy very nearly paid dividends when the French defence failed to contain a 16th minute raid.

However, French goalkeeper Hugo Floris averted danger with a fine save from Uruguay striker Diego Forlan, who unleashed a powerful shot from the edge of the penalty area.

There was a great response from France who transferred play to the opposite side of the field with a counter-attack.

They managed to take play down close to the corner flag. Referee Yuichi Nishimura of Japan awarded France a free-kick. Yoann Gourcuff's kick from the set-piece was steered away for a corner.

After the fast-paced start by both sides, the match seemed to settle down as playing patterns appeared more composed.

France wrested control in the midfield midway through the first half and several scoring opportunities emerged at regular intervals over a 12-minute passage of play.

However, there seemed to be a fair bit of indecision by the French around the fringes of the opposition penalty area, and Uruguay's frailty, especially down the middle went unpunished.

Towards the end of the first half Uruguay on occasions found ways to prise open the French defence, mainly with defence-splitting passes.

However, more often than not the passes were not accurate enough and a few promising situations came to nought in the closing stages of the first half.

France saw off a spirited start to the second half by Uruguay, who failed to capitalise when they had attacking options from a free-kick and three throw-ins deep inside the French half, all after only six minutes of second-half play.

In the ensuing passage of play France frequently managed to take play into the Uruguay penalty area and then they seemed to run out of ideas. At times when the situation cried out for a shot on goal, the French front-runners laid on a pass.

On other occasions they landed speculative long-range efforts. The introduction of Thierry Henry at the expense of Nicolas Anelka was greeted by an almighty welcoming roar from the crowd of 64,500 fans in the 66th minute.

In the 81th Urguay were reduced to 10 players when their second-half substitute Nicolas Lodeiro was red-carded after a second yellow-card offence.

France managed to exert a fair amount of pressure on the Uruguay goals. In the closing stages their striker Abou Diaby was fouled just outside the Uruguay penalty area, but Henry's free-kick bounced off the defensive wall without posing a problem in 92nd minute.