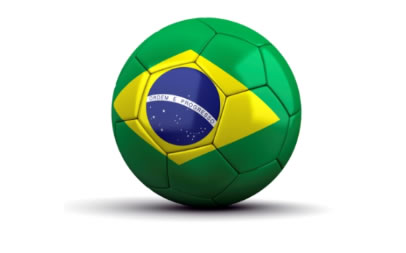 Brazil qualified for the last 16 of the World Cup with a 3-1 win against Ivory Coast in their World Cup Group G clash at Soccer City here on Sunday, but had star midfielder Kaka controversially sent off.
If anyone had any doubts about the validity of the five-times world champions right to be hoisted on a pedestal as favourites for the current tournament, they must surely have been dispelled by this masterly, all-round performance against what is supposedly the strongest team in Africa.
In the process, Brazil assured themselves of a place in the second round after securing six points from their opening games against Portugal and the Ivory Coast - with the only sour note to their display what seemed the cruel and incorrect sending-off of playmaker Kaka in the 84th minute.
Just as he had done in last year's Confederations Cup tournament in Africa when he helped guide Brazil to the title as the event's top scorer, Spanish-based striker Luis Fabiano spearheaded "The Samba Kings" irresistible football exhibition by scoring the opening two goals in the 25th and 51st minutes - with cagey midfielder Elano darting through the Ivory Coast defence in the 65th minute to run onto a clinical pass and slip the ball into the corner of the net with almost contemptuous ease.
It was Seville's Fabiano, however, who produced what were goals of uncanny skill and power when he first blasted the ball into the roof of the net with sledge-hammer effect for his first first strike and then scored again after dizzily controlling the ball with different parts of his body like a circus juggler.
Ivory Coast were already a well-beaten side when talisman striker Didier Drogba, bravely making an appearance in the starting line-up in spite of a fractured arm, headed home a consolation goal in the 79th minute with the Brazilian defence for once caught off-guard while appealing for an off-side.
While the Ivory Coast came off distinctly second best and received something of a soccer lesson, the African side demonstrated they are a team to be reckoned with by lesser opposition and cannot yet be ruled out entirely of a second-round place in spite of securing only one point from their opening two games against Portugal and Brazil.
The frustrated Ivorians, however, soured their performance with over-robust tackling and moments of play-acting when they feigned injuries-one of which accounted for what appeared the unfair dismissal of Kaka when he was more sinned against than a sinner.
The Ivory Coast started the match with a cocky flourish and gave Brazil some uneasy moments in the opening 25 minutes, but once Fabiano had made the breakthrough with his tour de force goal it was clear that the team that has taken a leaf out the great Muhammad Ali's book and "floats like a butterly and stings like a bee," were going to make off with the sweet-tasting honey as well.