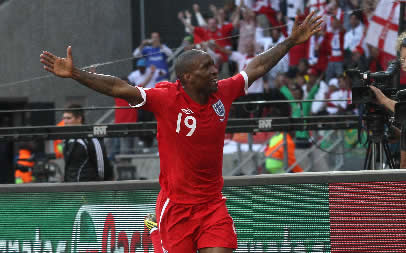 England beat Slovenia 1-0 which keeps them in the world cup and in the last 16 after Jermaine Defoe scored the only goal of the match.
England's World Cup campaign finally took off as Fabio Capello's side qualified for the last 16 when they secured runners-up spot in Group C.
The United States took top spot with an injury-time winner over Algeria, a late strike which also eliminated Slovenia who had started the day on top of the table.
Jermain Defoe started for England in place of Emile Heskey in one of the biggest gambles of manager Capello's career.
And the move paid dividends with the Tottenham striker's 23rd minute goal.
An opening 1-1 draw with the United States followed by the lame goalless stalemate with Algeria had left England staring at the possibility of failing to make it out of the group stage for the first time since 1958.
Capello's men turned up at the Nelson Mandela Bay stadium facing, as Steven Gerrard had so aptly put it, a do-or-die match.
They did it, and now have earned a second round date with the runners-up in Group D.
England started brightly, their passing sharp and accurate, but it was Slovenia who had the first shot on target when Valter Birsa tested David James in the fifth minute.
Wayne Rooney raised the temperature just after when he raced onto a superb through ball and Slovenia's defence had their work cut out to stop Steven Gerrard heading in his cross to the far post.
Capello had called for John Terry to put up a "big performance" after his failed mutiny and the Chelsea defender responded, making a fine robust intervention to rob Robert Ljubijankic of the ball beside James's near post.
England then took the lead with a superb high ball from James Milner, who started in place of Aaron Lennon, on the right wing into the box for Defoe to volley past Slovenia keeper Samir Handanovic.
In almost a carbon copy move minutes later Milner crossed again, this time Defoe's shot was parried by Handanovic with Frank Lampard pouncing on the clearance only to fire over the bar.
It took a succession of fine saves from Handanovic to prevent England from doubling their lead as the Slovenia keeper kept out shots from Defoe and Gerrard.
The boos that had followed England off the pitch after Friday's woeful performance against Algeria were replaced by cheers as they walked off at the break.
Seconds after the restart Defoe could and should have got his second, but his goalmouth effort after great work by Rooney on the left, went wide. He then had a goal disallowed for offside as England maintained their high tempo pace.
Unusually for this World Cup which has been raining yellow cards German referee Wolfgang Stark had been refreshingly restrained, with England defender Glen Johnson picking up the first booking of the game in the 46th minute.
A rejuvenated Rooney then grimaced as his close range effort hit Handanovic's right post.
Slovenia though gave them a scare in the 67th minute when Terry, Johnson and James combined to deny a trio of quickfire shots from Milivoje Novakovic, substitute Ziatko Dedic and Valter Birsa.
Chelsea midfielder Joe Cole made his 2010 World Cup debut, coming on for Rooney, with Defoe later making way for Heskey.
With England having regained the form that saw them sail through
their World Cup qualifying group it looked a matter of when, not if, they put the game to bed but hard as they tried a second goal proved beyond them But they held on, with Capello raising his hands in the air in delight, and no doubt relief when the final whistle blew.