Portugal through to last 16 after Brazil draw 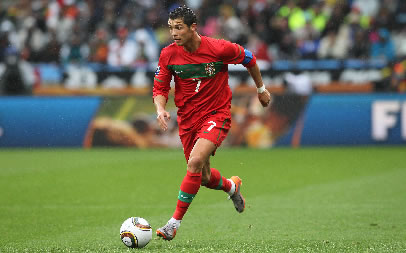 Portugal and Brazil failed to live up to expectation in Durban and played to a 0-0 draw which puts Brazil on top of the group and Portugal finishing second in the group.

With Brazil and Portugal having the reputation as being the world's two most powerful football nations, it was not surprising that this fixture was the most eagerly anticipated match of the first round.

But much to the disappointment of the capacity crowd, the eagerly awaited end to end attacking play that both teams are known to produce never materialised, consigning Durban to their first goalless encounter.

Brazil were not able to field their most influential attacking player, Kaka, who was red-carded in their previous match against Ivory Coast.

But Portuguese coach Carlos Queiroz was able to send out his superstar, Cristiano Ronaldo.

The crowd showed their approval, his first touch being greeted with a huge roar from the Portuguese red army spread around the gallery.

However, those clad in yellow sitting on the terraces were quick to break out in a cynical cheer when Ronaldo sent a free kick off target in the 25th minute.

The kick was awarded when Juan deliberately used his hands to prevent a punt from the Portuguese defence from reaching Ronaldo, who would have had a free run into the Brazilian penalty area.

Nilmar, playing on the right flank for Brazil was easily their most productive player in the first half and he almost fired home the game's opening goal after near the half-hour mark.

Portuguese centre back, Ricardo Carvalho, failed to deal with a cross played into their penalty area, allowing Villareal's Nilmar to fire an effort on goal from a tight angle.

Luckily for Carvalho, the ball crashed onto the crossbar and ricocheted back into play. The Portuguese defence was found wanting a few minutes later.

On this occasion, Brazilian marksmen Luis Fabiano ghosted between two defenders to head Maicon's cross from the right flank. But the strikers attempt lacked accuracy.

It was evident that neither team viewed this contest as a practice match. Biting challenges were the order of the day.

Referee Benito Archundia of Mexico responded by dishing out three yellow cards apiece to both sides in the first half alone.

Just after the break Ronaldo surged into the penalty area and in spite of having four markers surrounding him he was still able to thread the ball to an unmarked Raul Meireles.

Julio Cesar in the Brazil goal did just enough to tip Meireles' prod into the side netting.

Near the end both teams had a chance to steal the points. First Brazil's Ramires fired a speculative shot from about 25metres, which took a deflection off a defender, but Eduardo was able to fend off the danger.

With a minute Danny made a menacing run into the Brazilian penalty area but Cesar came of his line quickly to thwart the forward's advance.