England hammered out the world by Germany 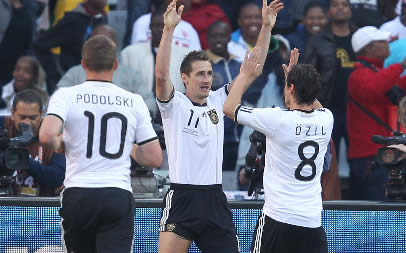 Germany beat England 4-1 knocking England out of the world cup in Bloemfontein and setting Germany up for a quarter final against either Argentina or Mexico.
Goals from Miroslav Klose and Lukas Podolski and a double for Thomas Mueller put Germany in charge.
For England Matthew Upson scored a consolation goal for England.
England midfielder Frank Lampard had a legitimate goal not awarded Sunday in a World Cup match against Germany, a reverse of what happened in the 1966 final.
With England trailing 2-1 in the first half, Lampard's shot from just outside the area hit the crossbar and bounced down.
Replays showed the ball had crossed the goal line. After landing inside the goal, the ball spun back into play.
In 1966, England and Germany were level at 2-2 in extra time when Geoff Hurst's shot struck the underside of the crossbar, bounced down and spun back into play.
That time, the referee consulted his linesman, who awarded the goal.
Hurst went on to score a third goal in England's 4-2 victory at Wembley.

The result is a record England World Cup finals defeat and was overshadowed by one of the worst refereeing mistakes in the tournament's history.

Germany's superior movement and ruthless finishing made them worthy winners on an afternoon when England's defending was shockingly sub-standard and their talisman, Wayne Rooney, once again failed to deliver on the game's biggest stage.

But there is no saying what would have happened if England had not been denied a goal that would have levelled the match at 2-2 just before half-time, when a Frank Lampard shot bounced off the underside of the bar and landed a yard over the goal-line.

Matthew Upson had just headed England back into the match after Miroslav Klose and Lukas Podolski had given Germany a two-goal advantage.

Two second-half goals for Thomas Mueller enabled the Germans to run up their most convincing win against their biggest rivals, but they were both scored on the counter-attack as England sought an equaliser they should not have been obliged to chase.

Referee Jorge Larrionda's misjudgement was all the more inexplicable because he was well-placed to see the incident. Yet, after looking across at his linesman, he waved play on.

England coach Fabio Capello said that the Lampard moment was the turning point, though, he will not be looking forward to the Monday morning headlines after yet another failure to emulate the 1966 World Cup winning side.

"The Lampard incident was one of the most important in the match," said Capello.

"The referee made one of the biggest mistakes, but Germany are a great team, we were caught out on the counter-attack.

"This is football. Little things make all the difference."

The controversy over the incident will rumble on but England will also have to ask themselves some hard questions after what was, at times, a shambolic display.

England's vulnerability at the back had been exposed early on and, after goalkeeper David James had denied Mueller, Klose exploited it to get on the end of goalkeeper Manuel Neuer's upfield punt to give Germany the lead.

John Terry allowed the ball to fly over his head and Klose outmuscled and outpaced Upson before flicking the ball past James with the outside of his boot.

Mueller did the damage for Germany's second. Taking Klose's first-time pass, the Bayern Munich midfielder broke into the box before switching the ball to Podolski, who beat James at his near post from a tight angle.

Neuer pulled off a superb reflex save at close range to prevent Lampard finishing off James Milner's low cross just before Upson gave England a lifeline.

Germany's goalkeeper had been impressive up to then but his lack of experience showed when he charged off his line and got nowhere near the cross from Steven Gerrard that the West Ham defender nodded in.

Lampard himself came agonisingly close to an equaliser seven minutes after the restart, hammering a free-kick from nearly 40 yards against the bar with Neuer struggling to cover.

Germany centreback Arne Friedrich, who had already been booked, was fortunate to stay on the pitch after a cynical body check on Rooney.

The resulting free-kick was blocked by the German wall and Germany immediately swept upfield to claim their third goal.

Bastian Schweinsteiger did most of the leg work through the inside left channel before switching the ball to Mueller who beat James at his near post with a fiercely struck drive from 12 yards.

The fourth was virtually a carbon copy, although this time it was Mesut Ozil who wreaked havoc after latching on to a punted clearance towards the left touchline.

The Werder Bremen star powered away from Gareth Barry with ease before cutting in to the box to present Mueller with the simplest of a tap-ins.